RF in the Photovoltaic Industry

The solar cells that you see on calculators and satellites are photovoltaic cells or modules (modules are simply a group of cells electrically connected and packaged in one frame). Photovoltaics, as the word implies (photo = light, voltaic = electricity), convert sunlight directly into electricity. Once used almost exclusively in space, photovoltaics are used more and more in less exotic ways. They could even power your house. How do these devices work?

Photovoltaic (PV) cells are made of special materials called semiconductors such as silicon, which is currently the most commonly used. Basically, when light strikes the cell, a certain portion of it is absorbed within the semiconductor material. This means that the energy of the absorbed light is transferred to the semiconductor. The energy knocks electrons loose, allowing them to flow freely. PV cells also all have one or more electric fields that act to force electrons freed by light absorption to flow in a certain direction. This flow of electrons is a current, and by placing metal contacts on the top and bottom of the PV cell, we can draw that current off to use externally. For example, the current can power a calculator. This current, together with the cell’s voltage (which is a result of its built-in electric field or fields), defines the power (or wattage) that the solar cell can produce.

Anatomy of a Solar Cell

Before now, our silicon was all electrically neutral. Our extra electrons were balanced out by the extra protons in the phosphorous. Our missing electrons (holes) were balanced out by the missing protons in the boron. When the holes and electrons mix at the junction between N-type and P-type silicon, however, that neutrality is disrupted. Do all the free electrons fill all the free holes? No. If they did, then the whole arrangement wouldn’t be very useful. Right at the junction, however, they do mix and form a barrier, making it harder and harder for electrons on the N side to cross to the P side. Eventually, equilibrium is reached, and we have an electric field separating the two sides. 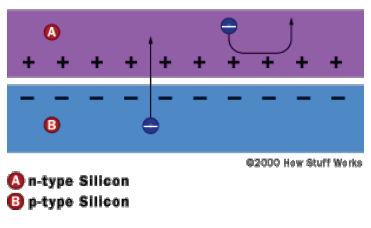 This electric field acts as a diode, allowing (and even pushing) electrons to flow from the P side to the N side, but not the other way around. It’s like a hill – electrons can easily go down the hill (to the N side), but can’t climb it (to the P side). So we’ve got an electric field acting as a diode in which electrons can only move in one direction. When light, in the form of photons, hits our solar cell, its energy frees electron-hole pairs. Each photon with enough energy will normally free exactly one electron, and result in a free hole as well. If this happens close enough to the electric field, or if free electron and free hole happen to wander into its range of influence, the field will send the electron to the N side and the hole to the P side. This causes further disruption of electrical neutrality, and if we provide an external current path, electrons will flow through the path to their original side (the P side) to unite with holes that the electric field sent there, doing work for us along the way. The electron flow provides the current, and the cell’s electric field causes a voltage. With both current and voltage, we have power, which is the product of the two. 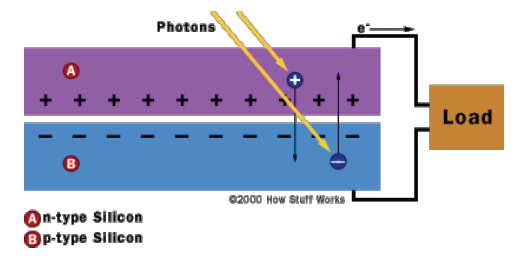 There are a few more steps left before we can really use our cell. Silicon happens to be a very shiny material, which means that it is very reflective. Photons that are reflected can’t be used by the cell. For that reason, an antireflective coating is applied to the top of the cell to reduce reflection losses to less than 5 percent. The final step is the glass cover plate that protects the cell from the elements. PV modules are made by connecting several cells (usually 36) in series and parallel to achieve useful levels of voltage and current, and putting them in a sturdy frame complete with a glass cover and positive and negative terminals on the back. 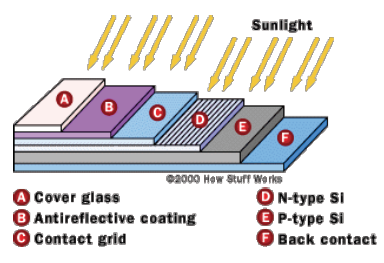 RF Global Solutions repair all the RF Related Equipment used in the manufacture process of Photovoltaics.

We invite you to contact us directly for more information on RF in the Photovoltaic Industry.

We are now recruiting Electronic Engineers (Qualified and Trainee/ Junior)